Being a typical Indian from the core of my heart, I love Indian food and specially halwa, be it Wheat halwa, Besan ka Halwa or Gajar, suji ka halwa. This is a delicious recipe of Besan (Chickpea flour) Halwa flavoured with Ghee, Cardamom and Kesar. I havent added any dry fruits as nobody like dryfruits in halwa in my family. They find it a distraction so in none of my halwa recipes ever had almonds or for that matter any nuts. May be I have used them for garnishing for the click of photos only to remove them later. Feel free to add your choice of nuts. Generally, almonds, cashews and raisin go well with halwa. On several occasions I have made halwa like Navratri or celebrating birthday. But besan ka halwa is my first attempt. I had made besan ka sheera for warding off cold and cough but this time I had Pradosh fast that fell on Tuesday. Generally, I make kheer but this time I wanted to please Lord Hanuman along with Shivji and Parvati Mata and I decided to make a sweet with besan. I came across Swasthi’s recipes (https://www.indianhealthyrecipes.com/) and I felt that its not tough. This is also the first time that I made halwa by mixing milk and water along with kesar (saffron strands) and I must say that it was awesome. For the God I cant say whether he liked it or not, but his fellows down here with me, they kept licking their fingers. This is the only thing thats gives a whole lot of satisfaction.

Besan ka halwa is not just a delicious but a healthy meal for everyone including growing kids. Its a rich source of carbohydrates, proteins, good fat (as we make it in desi ghee) and vitamin B. You may add turmeric and black pepper as well and with thin consistency. This is besan ka sheera and it acts as a immunity booster drink and eases up blocked nose and chest (cold and cough). Its meal in itself and reduce fatigue and its a fibre rich food so keeps us full for longer. Those who are diabetic should avoid high sugar food and they may replace sugar with jaggery and have controlled portions of these sweets as per doctor’s advice.

Making Besan ka halwa is really simple. I have used desi ghee for sauting Besan. You need to make sure that the pan/ kadai are heavy bottomed. This is because besan gets quickly heated up and changes color and we dont want that to occur fast. It should happen in a slow process. Also add ghee in such a way that we have smooth consistency of besan and ghee. Saute both on small burner on low flame. Let Besan be cooked slowly and leave the raw taste else you will have raw taste in final halwa. While we saute the besan, we can make Chashni on other burner. For one katori/portion/cup of besan, you may take one portion water and one portion milk. Add one cup sugar (for very sweet) or 3/4 cup sugar (for normal sweet) or 1/2 cup sugar (mild sweet). Add fresh cardamom and kesar. If you wish to add Black pepper and turmeric, add in water and milk mixture. For one cup, 1 tsp turmeric and 3-4 whole black peppers are sufficient. Boil this mixture till sugar dissolves. Keep it aside and once besan changes color and leaves ghee from kadai (which you would know as the house would be aromatic), then you may add slowly the water-milk mixture into besan ghee. Keep mixing so that no lumps are formed. Once the besan absorbs water, it would be whole one smooth lump and thats where you may switch off the burner.

Our delicious Besan ka halwa is ready!! Enjoy this with poori or parantha. 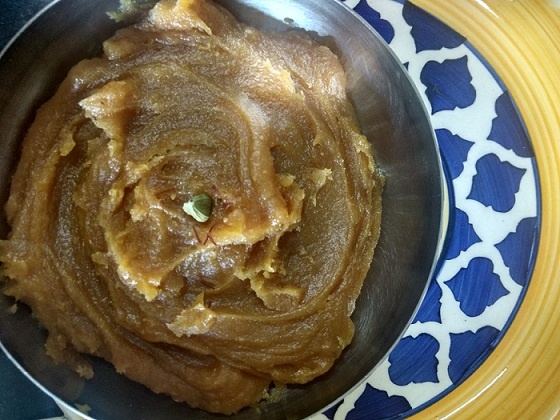 You may add milk only or water only. The color and taste would differ but it solely depends on how you like it.