Bread Pakora also called Fritters is a simple and quick recipe. I always had loved Plain Bread Pakora. My in-laws relished however, a stuffed Aloo Bread Pakora and I got a chance to learn this one too. When I first tried it years back, I was worried that the stuffing of Aloo would come out while frying but thanks to the tips of my mother-in-law, it never happened. So I would love to share these tips with you so that you as well as my generations would also know it from the blog when I am not around.. Simple Principle of frying: The oil should be hot enough, if its cool, whether stuffed or besan/flour coated will not be fried properly. Once you add the item to be fried in hot oil, simmer it after one min so that it cooks slowly and completely else it would be cooked from outside and inside would be still raw. Once its almost done, again out the flame on high and then take it out from Kadai so that oil doesn’t seep in the fried item. Stick it to the top of pan and press against the Kadai walls and let oil squeeze out.

The ingredients are quite basic. We need Fresh Bread, Besan(Chickpea Flour), Boiled Potatoes and Masalas of Indian Kitchen and yes Oil for frying. For frying I always prefer Mustard oil over any other oil. It makes the item Crisp and doesnt seep in much. From Poori, Pakora to Bread pakora, I always use Mustard Oil and avoid Refined Oils. Stuffing can be of Paneer, aloo or any other vegetable of your choice.

Coming to the nutrition, Yes Its a high calorie food item. It has to be as its deep fried. Around 300 calories in one serving of stuffed aloo bread pakora, which means two breads stuffed with aloo and fried together. The question is is it healthy?

Well we have several opinions on that and mostly they end up in saying A BIG NOOO to fried items…They are not healthy. However, I absolutely disagree..

I would really like to ask them that being Indian how can we just not eat fried and also Why not. I am not asking you to eat fried food daily or binge on fries but my point is everything in moderation is Healthy unless avoided due to allergies or suggested by doctor due to some health issues involved. Besan is rich in proteins & good fats, low in carbohydrates, increases metabolism, and helps relieves constipation. Are we saying that kids should not eat besan bread or aloo or onion pakora? Lets just lift a leg and make a hygienic fresh oil fried items at home. The unhealthy part is the repeated use of same oil again and again by the food vendors, using old boiled potatoes or chanas or other vegetables, using refined oil, adding too much salt and other Masalas. Just remember Not to use same oil repeatedly as that makes it unhealthy. I never ever use the oil used for frying even in making other veggies. Add Basic masalas, salt in limited quantity and make fresh Fried food at home.

I am enjoying the Aloo Bread Pakora with Sriracha. You would have it with which chutney? Do remember to share your experience with me. 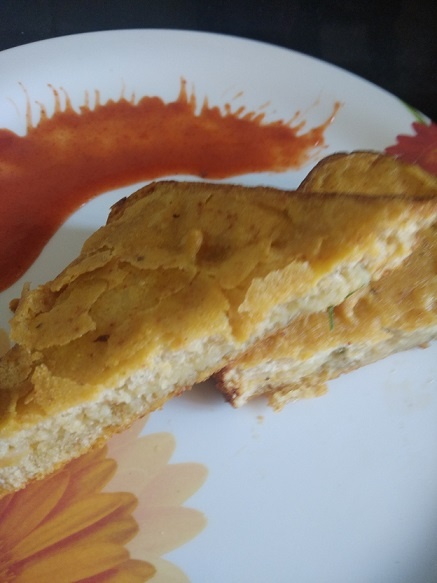 A simple tip for any fried item: Always use a fresh newspaper for absorbing extra oil of frying. Never Use a tissue paper. Whenever a hot fried item is placed on a tissue paper, it sticks to it and we don't realise, tissue gets absorbed in food which is not healthy.